Playing on Polaris, this system is where you live and work; Cynosure Station and the NCS Northern Star are located here. Vir's government stabilized comparatively recently, and as a result has a smaller population than most other garden worlds. Its position along the Almach Stream and centralized between the Core Worlds, the Sagittarius Heights, and the Golden Crescent made it a veritable trade hub for many years prior to the Tachyon Downtick, attracting the interest of a number of Trans-Stellar Corporations, most prominently Nanotrasen. Traditionally considered a fairly "safe" system, its immense volume of trade has always attracted a number of pirates, and the high concentration of xenoarchaeological artifacts made it a focal point for the devastating Skathari Incursion, which has rendered some regions of the system particularly dangerous to this day, including some of Sif's surface, most notably the Anomalous Region.

Vir is the capital system of the Golden Crescent Alliance Bloc, one of SolGov's decentralized regional blocs formed to aid in local defense and autonomy following the Incursion. The other regional member states are Oasis and Gavel.

Vir was first identified as a candidate for colonization following a 2182 automated survey. Considered unreasonably far from Sol to sustain a colonization effort, the system would remain fallow for decades. Early in 2200, the government of the Scandinavian Union proposed a Sivian colonization project, in an effort to address overcrowding after the repair of Earth's ice caps. 2209 saw the formation of New Reykjavik from 10000 colonists aboard the SCV Leif Eriksson, soon followed by two more waves of colonists.

While initially an extremely promising colony, a number of setbacks soon conspired against the Sivians. Piracy along the route to Vir cut deeply into the pockets of the small Earth nation that financed the colony. Distance from the Core Worlds allowed corruption to fester within the colonial administration, who syphoned luxuries and medical supplies from supply drops to gratify themselves. The colonists, most of whom had never set foot outside a city before, were unprepared to face the harsh Sivian winters or the planet's dangerous wildlife (soon supplemented by the Sivian Giant Spider). While colonies around Vir received economic and military support from the early Trans-Stellars, Vir itself was something of a "dead zone" for TSC investment as a result of being owned by an Earth nation. The outer belt and the moons of Kara became home to pirate bases while resupply runs from Earth became rarer.

In 2292, Scandinavia finally withdrew from the system. The newly independent Sivian population had, over the course of many long winters, become insular and clannish and failed to form a single planetary government. The various Sivian communities were incorporated as individual protectorates in what they called the "silent collapse" of the Scandinavian hegemony. True industrialization would only be reached four decades later, when SolGov assumed administrative control over the system over the protests of its residents. Nominally an attempt to make trade in the region safer in light of the discovery of the Skrell, the Fleet occupation and the construction of the Vir Interstellar Spaceport saw massive improvements in Sivian infrastructure. The efforts of the Sol Marine Construction Corp to modernize the undeveloped nation, notably through the construction of the Radiance Energy Chain, were televised nationally, and caused an appreciable spike in Sivian immigration.

Meanwhile, corporations began moving into the abandoned asteroid bases of the defeated pirates, discovering sizeable deposits of xenoarcheological artefacts and phoron. Vir came to develop two cultures; the Sivians, stoic, hardworking, and traditional; and the Karans, who were laid-back and cosmopolitan. The Karan development saw the first introduction of positronic brains to the Vir system. With the presence of a clear competitor and challenge to their way of life, the Sivians formed the Sif Planetary Government, or SifGov, in 2364. Capitalizing both on the anti-corporate sentiment of the galaxy and the growing belief in positronic self-determination, SifGov engaged in a series of limited wars with the corporations of Kara. The goal of the so-called Karan Wars was to establish SifGov as the sole authority in the Vir system, with the side goal of establishing democracy and positronic suffrage in the Kara subsystem.

The Karan Wars continued on and off until 2412, when SolGov threatened sanctions, and resulted in a Sif Planetary Government that controlled far more than the planet of Sif. In light of this fact, and of the growing sense of a Sivian national identity, the Sif Planetary Government was restructured from a loose confederation to a unitary state, which controls the system today as the Vir Government Authority, or VirGov. The new government quickly applied for and received full member state status, ending its 200 year tenure as a protectorate. The VGA brought an end to the fighting that had characterized Sif's society for centuries, but its anti-corporate policies lost it support from the TSCs and forced it into a long period of semi-isolationism. Virite politicians were an influential voice in the formation of the Shadow Coalition because of the system's history as a FTU stronghold.

Vir's fortunes would only change with the beginning of the First Contact War, almost ninety years later, which resulted in a shortage of secure frontier colonies for corporate investment. VGA responded by reducing its protective tariffs and allowing TSC habitats in Kara significant autonomy, giving birth to the "marriage of convenience" between VGA and the phoron-hungry NanoTrasen in 2514. Vir continued to obstruct attempts by Nanotrasen and other corporations from constructing "voter farms" within the Vir system, ensuring that VGA would remain an unbiased democracy and maintaining their relationship with the Shadow Coalition upper staff.

In 2566, Vir became one of a number of systems particularly hard-hit by the Skathari Incursion, resulting in an exodus from many more remote facilities due to a percieved safety in numbers and the government stretched thin attempting to respond due the highly delayed response of the SCG Fleet. This left the system particularly vulnerable to percieved "home-grown" security corporation Hedberg-Hammarstrom to increase their influence over VirGov, who were seen as saviours where SolGov had failed due to their auspiciously timed contract for control over the system's defense and security forces two years prior.

Since 2570 the system has led the Golden Crescent Regional Government, a semi-autonomous region of SolGov instituted after the Incursion to grant greater local power to local polities to prepare for and respond to threats in light of the decreased capability for long range interstellar travel. The other member states are Oasis and Gavel.

While today Vir has largely shaken its unsteady early roots, elements of its legacy remain. Sif is one of only a few garden worlds to contain only one state, and has a population to match.

The Virite population is widely distributed through the countryside, with as many as 20% of the population living in individual homesteads. Outside of New Reykjavik, Kalmar, and other large cities, police presence remains negligible, giving Sif a reputation as a place to "lay low" or "go off the grid". Sivian natives still tend to be very self-reliant and somewhat distrusting of outsiders, corporations, and government, though this has lessened as migrants from outside Vir and from the cosmopolitan Kara habitats have begun to settle on the planet.

Meanwhile, Nanotrasen continues to expand its phoron mines and research labs both on Sif and in Kara, injecting its futurist corporate culture and Galactic Autonomist Party influence into the system despite popular outcry. While sometimes stereotyped as sleepy and innocuous, beneath the surface is a tremendous amount of tension between the traditions of the past and the promises of the future-- giving the people of Vir an unusually personal perspective on the great questions of the era.

Vir is an A-type main sequence star with just over 80% more mass than Sol, and almost nine times as bright. It has six major planets in its orbit.

Other Locations of Interest 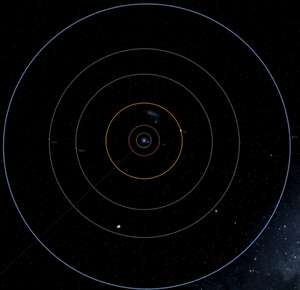