Sif is a terrestrial planet in the Vir system with one moon, Thor. It is somewhat earth-like, with tidal oceans, a breathable atmosphere, a magnetic field, weather, and similar gravity to Earth. It is currently the capital planet of Vir. The center of government is the equatorial city and site of first settlement, New Reykjavik.

The Vir Governmental Authority is the sole governing administration for the Vir system, based out of New Reykjavik on Sif. It is a representative democratic government, and a fully recognised member state of the Solar Confederation.

Planetary defense and government law enforcement are under the jurisdiction of the Sif Defense Force (or 'SifGuard'), who also serve the entire Vir system, though many corporate facilities and colonies provide or contract their own security forces. Since 2564 the SifGuard has been managed and operated by the Hedberg-Hammarstrom corporation.

Corporate entities such as Nanotrasen which operate on Sif, in Vir space, or on other bodies in the Vir system must all comply with legislation as determined by the VGA and SolGov. As a result, any serious criminal offences, industrial accidents, or concerning events should be forwarded to the VGA in the event that assistance or communication is required from the Vir Defence Force, Vir Interior Ministry, or other important groups.

The 2560 census places Sif's surface population at 47,582,020. Of that number, an almost 95% majority are human. Of other species, Tajaran and Teshari make up a significant demographic due to the suitability of the climate, while conversely Skrell and Unathi broadly consider the planet to be near-unlivable outside of temperature controlled areas.

A large portion of the human population on Sif are descended from the original Scandinavian colonists and those who followed, which has had a significant impact on the local culture, including language dialect, cuisine, place names, and architectural styles, though there are also significant populations from a wide range of Earth and extra-solar human cultures, especially in major cities such as New Reykjavik, Kalmar and Ekmanshalvo.

The Tajaran community on Sif is represented by current culture minister Kurah Zarshir, and have sizable Hrarar and Njarir'Akhan enclaves in most major cities as well as in more rural, especially coastal areas. A number of Teshari packs have also established settlements across the planet, relatively free from Skrell. Despite the climate, the planet hosts a number of extensive Skrellian fungal farms with heavily controlled environments - most belonging to Vey Medical and subsidiaries of Centauri Provisions - which have become a matter of debate among environmentalists.

NanoTrasen is the single largest employer in the system, though every Trans-Stellar operates at least some facilities on the planet. The largest Sif-based corporation is arms and security firm Hedberg-Hammarstrom, founded in 2509.

The planet is also notable for the presence of sites of Xenoarchaeological interest, indicating the pre-historic settlement of at least one highly advanced civilisation.

Sif has one main continent (New Iceland), a smaller continent (Londuneyja), several smaller islands, and one massive ocean. The planet is approximately 77% water, though almost all of its landmasses are connected by permanent ice sheets. On the continents, an abundance of mountains, ice, and snow are present, which presented a challenge for colonial settlers though the terrain and climate are milder around the planet's equatorial region. The temperature at the equator is on average a chilly but habitable 11 degrees Celsius (~52 Fahrenheit), and this is where the majority of human settlement has occurred, especially on New Iceland's sheltered eastern coastline.

The smaller Londuneyja continent was wholly evacuated during the Skathari Incursion due to the formation of the Sif Anomalous Region, which encompasses much of the landmass. Some residents refused to evacuate and remain in place despite the danger. 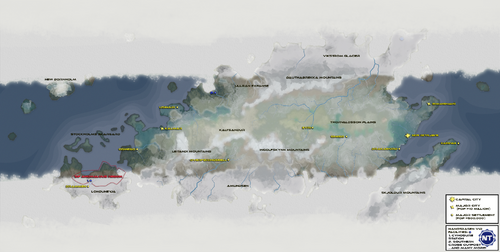 Sif's capital and largest city, New Reykajavik was the site of first settlement by the Leif Eriksson colony ship in 2209. Now a sprawling metropolis, the city hosts the regional headquarters of many Trans-stellar Corporations. The city makes extensive use of the planet's pale stone in its construction, and clever blending with glass and local, bluish wood in many of the city's landmarks has given the city the remarkable ability to appear natural - if far more geometric - in its surrounding environment.

Formed during the Skathari Incursion and reaching its current extent in 2568, the Anomalous Region is a large area of the Londuneyja continent plagued by often hazardous and largely yet unexplained phenomena believed to have been generated from the interaction of Skathari energy manipulation and pre-existing precursor technologies. Defying prior understandings of physics and manifesting new elements never before observed in the universe. Exclusive rights to investigate the region have fallen to NanoTrasen due to an entirely coincidental land deal decades prior for the construction of the Cynosure Station mineral extraction research station, which places much of the SAR within their perimeter. The station, naturally, was converted to a state-of-the-art xenoarchaeological and anomaly research post soon after the Incursion due to the staggering research potential and despite the significant risk.