Nyx is on the edge of colonized human space; a frontier system. It holds the dubious distinction of containing the only known and recently identified phoron giant, Erebus, making it a hotbed of both Trans-Stellar Corporate interest and, due to its distance from the better-policed parts of human space, criminal activity.

Although Brinkburn and Roanoke play host to significant and stable colonies backed by SolGov support, the confederate presence in the system has been only nominal for years; what justice there is, you bring with you. The universally accepted currency in Nyx is the SolGov-backed Thaler (þ), although simple barter is often an acceptable alternative. With the advances of technology the overall standard of living and education is high even out in the frontier - if you can afford it.

A red dwarf flare star far out in the frontier. There are four planets orbiting it, not including its sub-stellar companion, Erebus. Massing at only 58% of Sol's mass with 69% of Sol's radius, Nyx has a much closer "Goldilocks" zone than Sol. Nyx is known to have an unusually low equatorial velocity of about 1.2km/s.

The Void Star No one quite knows who built the Void Star, or indeed who actually manages the place. Theories abound, ranging from corrupt corporate interests to organized crime; some more outlandish offerings even claiming the place has always been, like some kind of haunt. The Void Star is commonly described as a casino and best known as a pleasure station, orbiting furtively at the edge of Brinkburn's rings with a protective entourage of hired small craft and sprinkled inside and out with garish neon signs, loud music from a dozen different worlds and, if you're willing to dig deep enough, anything you could possibly think to spend Thaler on (and a great many things you couldn't). Some - brave, mad, or both, but all with money to burn - even call it home.

Emerald Habitation A relatively sub-par housing station with a significant non-human population. The facility is a jumbled set of mixed commercial and crowded residential modules, each with their own unique environmental systems quirks that make traveling within the station an adventure in fragrances. Despite its reputation Emerald Habitation is well trafficked, as its prices allow lower income spacers the means to find their feet in Nyx; or at least a berth headed elsewhere.

Erebus' most notable moon, although not its largest, is Roanake, a dwarf planet in its own right which orbits with a high enough eccentricity to have significant volcanic activity due to tidal heating. Despite these inhospitable conditions, it plays host to a small and lucrative (if cramped and uncomfortable) sub-surface rare earth mining settlement with a population of several hundred.

The main hub for Nanotrasen in the Nyx system, commonly referred by their workers as central command or "CentCom". The Crescent refines and stores much of the products that stations (such as the Exodus) bring in. It is one of the largest refueling and supply stations in the system, as Nanotrasen is able to outsell any local competitors.

A highly profitable Nanotrasen research and prospecting installation, primarily focused on the exploitation of phoron. In recent years, the Exodus has been under threat from opportunistic raiders due to the value of the work carried out aboard coupled with the poor system security of Nyx.

A well visited Free Trade Union space station where a large amount of the independent trade outside of Brinkburn is done, consisting of extensive facilities built into and away from the surface of one of the larger moons of Erebus. 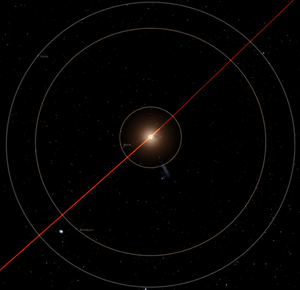