Guide to Setting Up the Supermatter

The supermatter engine, located in the aftmost part of Engineering, is the main source of power for the station; while it is theoretically possible to run the station off of solar power, the setup time is too slow for most normal-sized crews and the station almost inevitably draws its power from the engine.

The supermatter engine is extremely dangerous; when deliberately tampered with or poorly set up, it can easily blow a substantial hole in Engineering and leave the station all but powerless in the aftermath.

There are a few important safety principles to remember when working with the engine: 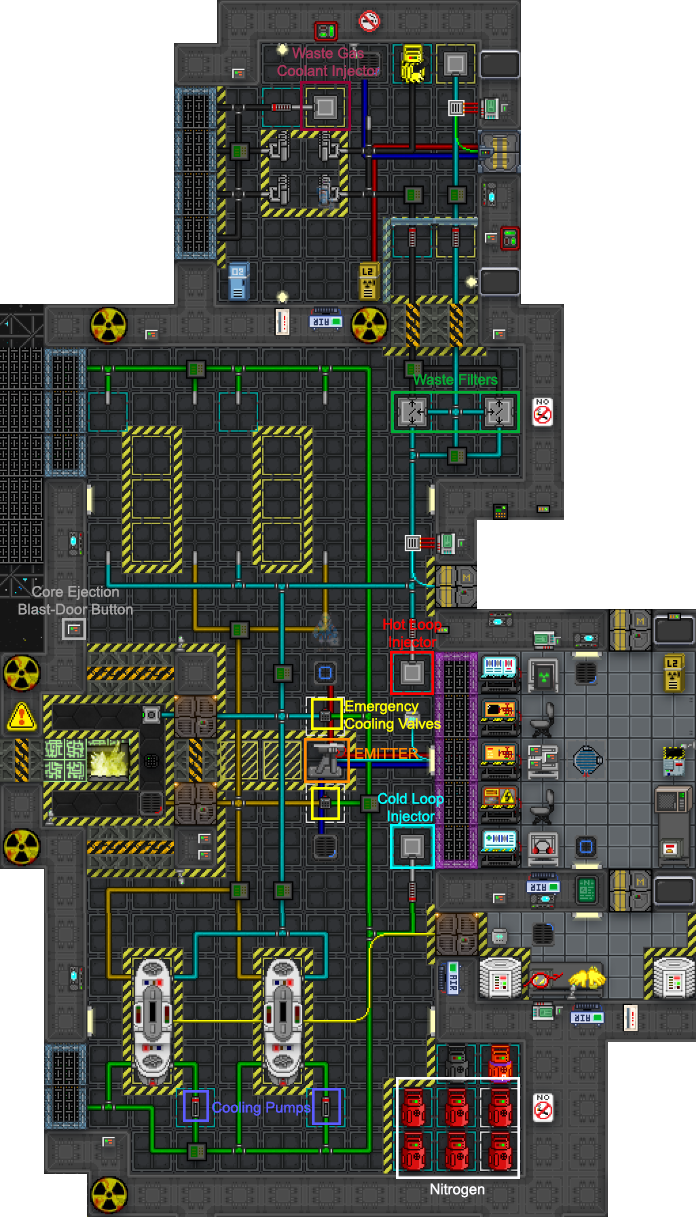 If you are new to the engine and the only engineer on shift, skip ahead to the start of the "Procedures" section for a quick guide on how to get the engine running, and come back to this later.

The engine uses a Thermoelectric Generator - TEG for short. The top side is heated through gas pumped through the supermatter chamber, while the bottom side is cooled using the radiators.

In its base state, the supermatter does not produce any heat, but when it is activated by the

emitter which is in the engine room for this purpose, the core begins to heat up. For this reason, in order to produce heat and therefore power, the supermatter must be activated using the emitter; this is referred to as "starting" the engine.

Activating the supermatter causes it to produce not only head and radiation, but also oxygen, and phoron. The gas from the engine is drained using an "Engine Room Vent Pump #1" on the bottom end of the supermatter chamber. It passes through yellow pipes where it enters the TEGs, cools down, and to the blue pipes. Blue pipes have two omni gas filters attached to them. These filters are, by default, set to filter everything but nitrogen out into the black waste pipes, then inject the cooler, cleaned nitrogen back into the core chamber. These filters are turned off at the start and need to be turned on. Oxygen overcharges the supermatter; phoron is not dangerous on its own but is inflammable.

The Engine Waste Handling room cools and stores the byproducts filtered from the engine coolant. The black pipes at the very top left are the intercooler loop; they run out into space, and the gas within them is cooled by radiating heat out into space. The byproducts never enter the intercooler loop; it must be filled with coolant (usually the CO2 canister found in the engine room, but any gas works) to work.

The black pipes on the right contain the engine waste.

The weird grey things within the hazard-marked area are the heat exchangers; they let the heated gas in the byproduct lines be cooler by the colder gas in the intercooler loop.

This section describes all of the basic procedures which can be carried out with the engine room equipment. Follow these in order to perform an engine setup, up to the optional/maintenance/emergency steps.

The canister port attached by a pump to the upper, blue coolant line (the hot loop) allows the injection of coolant into the engine. To add coolant to the engine:

Do not start the engine unless all other engine setup has been completed. Failing to do so will cause delamination.

Continue now to complete Engine Waste Setup and Setting Up the SMES sections below.

Setting up the engine waste system is essential to prevent the engine from overheating.

Setting Up the SMES

There are two SMES units which need to be set up in the Engine Electrical Maintenance room, aft and starboard of the engine room. See [Power Management] for setup.

All engine setup is completed now. All procedures below are in case of specific situations. Make sure to read the section about optimizing Power Output, since that is required in the first 10 minutes or so.

In some situations, such as minor overheating of the engine, you may wish to purge the engine of coolant before injecting more. The engine is specifically designed to allow you to pump coolant into canisters in order to do this.

For many crews, it is standard procedure to relabel one of the empty N2 canisters used to fill the engine as a hazard canister and attach it to the Engine Drain port so that a canister is already in place for an emergency.

When engine overheating is serious enough that there is no time to drain the engine, the coolant inside the engine can instead be vented into space. There is a shutter aft of the core which vents directly into space. There are two buttons which control this shutter. One is located in the bottom-right corner of the engine room, another in the Chief Engineer's Office near the entrance to the Engineering lobby.

Venting the core is as simple as pressing either of the two buttons to open the shutters, and allowing the coolant to vent. This can take a long time - up to a minute or two if the coolant is especially hot or high-pressure - since much of the coolant will be in the pipes rather than in the core when venting starts. Engine pressure can be monitored from the Engine Cooling Control computer in Engine Monitoring.

Once the core has been fully vented, be sure to close the shutter before refilling it with coolant.

If it is utterly impossible to salvage the engine situation, it is possible to eject the supermatter into space, avoiding severe damage to the station.

A new supermatter core can be ordered from the Cargo department to replace the ejected one.

The supermatter stops producing radiation after not having been hit by an emitter blast after awhile. This will slowly lower it's power output as a result. Additional charging may be needed if the power being outputted is not enough to charge the

APC units across the station.

Make sure that you check the power output from the engine for the first 10 minutes or so, and optimize the SMES levels accordingly. You don't want too much power wasted, but you also don't want the input level to be higher than the produced power, because then it will start taking power from the existing powernet.

Once all APCs around the station have been fully charged, power requirements are reduced. If you wish to reduce potential harm caused by electrical shock, output levels can reduced as well.

If the supermatter gets too hot or too unstable, it will begin to break down. In such situations, the Engine Monitoring Computer will make an announcement over the station intercom to that effect. If you hear this announcement, haul ass to the engine room immediately. Unless there are many other engineers on shift to do it, your first priority is to get the engine under control.

The first thing you should do is try to find the problem which caused the engine temperature to spike. Power failures due to not setting the

engine SMES output high enough, or not turning its input from "Off" to "Auto", are surprisingly common. Otherwise, any number of things may be tampered with by a troublemaker to cause things to go awry. Often, simply finding and fixing the problem will cause the engine to stabilize by itself. If, however, the core instability reaches 40%-50% and you have not found the cause, you urgently need to cool the core if only to give yourself time to find the root of the problem.

There are essentially four things you can do to get the engine temperature down to safe levels:

Emergency Coolant Injection is always a stopgap measure, but it can be one that saves your life. Injecting fresh coolant into the engine without getting rid of the current coolant is a quick way to bring the temperature back down while you prepare for a more effective measure. This is especially effective if Atmospherics have cooled some nitrogen especially for use as emergency coolant.

Draining and replacing the coolant is the best way to resolve the situation if you have the time. Following the procedures list above, first drain the coolant currently in the engine, and then - once all of the coolant has been drained - inject fresh coolant. As always, specially-cooled emergency coolant will speed up the stabilisation of the engine.

Ejecting the supermatter is the most drastic method, but can save the station in a pinch. If instability rises above 80%, or if it seems like you cannot stop the meltdown regardless of the exact level of instability, you should eject the core as per Procedures above. If there are enough engineers on staff, at least one should be standing by to eject while the others work on other methods of getting the core under control, just in case it becomes necessary.