Research and Engineering is now capable of building custom machines, that will hopefully accomplish whatever goal the creator had set out for the machine to solve, such as a health monitoring system, smart turret, a signaler controller for their bombs, or perhaps something to give Beepsky a run for their money. Or perhaps something else entirely, as more and more new parts get added to expand the metaphorical toolbox for these creators.

The Machine and Components

Each machine can hold a limited amount of components, limited by both number of components, as well as an abstract 'complexity' value for each component. Complex components are generally things that interact with the outside world, like weapon systems, or a fast pulse ticker. Smaller machines will have stricter limits on how many things can be shoved inside at once, where as larger ones allow for more space, but are less space efficient when carrying it.

A component, generally referred to as a circuit, has 'pins' on it, of three different types. Pins are connected to other pins, on the same circuit or on another circuit inside the machine, and are used to pass information or activation pulses from one component to another. 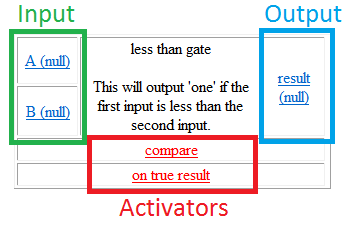 Input pins, as named, are what the circuit uses as input, where as the output pins are where the results go. For example, an addition circuit will sum up all the numbers it finds in their input pins, then put the result in their output pin. Activation pins are special, in that they don't carry data, but instead act as triggers for a component to do work. The addition circuit needs to receive a pulse signal to its activation pin in order for it to actually compute the sum of the inputs. When a circuit does work, and places its output in the outpin pins, it will then 'push' the data to any pins linked to the output pins, so that those pins will have the correct data. Most circuits do not 'pull' data, but instead need to have it 'pushed' from another circuit.

A pin can be linked to an arbitrary number of other pins, as long as they are inside the same machine. Removing a component will automatically unwire everything from it, so keep that in mind.

On the wiring interface, input pins are always on the left, output pins are on the right, and activator pins are on the bottom side. They are also colored red. Pins that are linked to to other pins are bolded, and will have a link to go to that circuit underneath. The data that pin holds, and the type it is, will also be visible.

To wire something, you first need a special 'wiring' tool. You will also need a custom machine item, which resembles a cube, and some special circuits. All of this can be printed in R&D, and in the future can be found in tech storage.

Other tools you may need are screwdrivers, which will remove circuits from the machine, and crowbars, to open or close machines.

First, use a crowbar on the machine to open it, if it is not opened already, then start sliding some circuits inside. You'll hear it slide into place if there's enough room and it's not too complex. After that, examine or hit the cube with the wiring tool, then select a circuit to look at. After that, click on a pin, then on another pin, on the same or a different circuit, and they'll link together. Remember that activation pins don't carry data, and so can't be linked to input/output pins.

To unwire, just use the wire tool in your hand to change it to unwire mode, then click two pins to unwire them.

Pins can hold three types of data, which are strings (text), numbers (both integers and floating-point, because BYOND), and object references (called Refs). If there is no data in a pin, it displays 'null'.

Some circuits mandate that input data be a specific type of data. For example, a circuit wanting X and Y coordinates will require that those inputs be numbers. If it's given text, it will do nothing, and therefore won't work. Sometimes numbers can be converted to text, and text to numbers, with specialized circuits. For example, the number 5 can become the string "5".

On the wiring interface, you can tell what type a piece of data is by looking at how it is presented, between two brackets. Strings are always wrapped in quotes, as in many programming languages, where are numbers are not, and are (obviously) only numbers. References have a [Ref] at the end of the name for the referenced object, and no quotes. Refs are somewhat more rarely used, but are powerful. 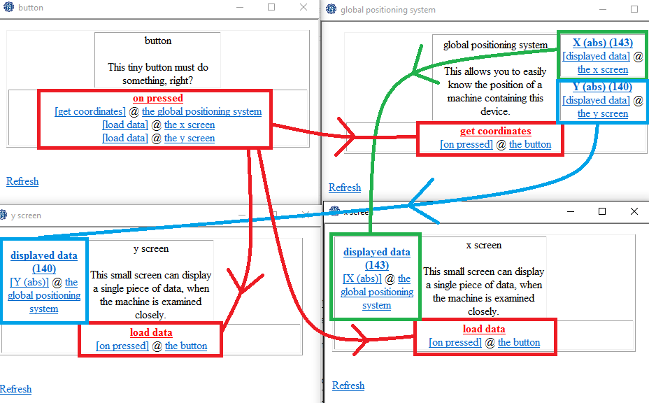 Flow Control is a term used generally for programming languages for determining in what order does code get executed. The same principal applies for custom machines, using activator pins. The proper management of how a pulse goes to each component in the correct order will be very important for complicated or big machines.

Fortunately, there are some components to help with organizing your flow control. For example, there are pulse splitters to allow for cleaner wiring. Delay timers also exist so that you can make sure everything goes off at the right time (although it's best if your machine is not dependent on that, which is known as a race condition in programming). Many circuits will also propagate a pulse if it passes a certain condition, for example many logic gates, ensuring that something will occur only if you want it to.

It should be noted that each component has an internal cooldown, by default two seconds, whenever it does work. Further pulses will result in nothing happening.