Cynosure Station is a Xenoarchaeological ground station owned and operated by NanoTrasen, located in the Anomalous Region on Sif.

Cynosure was constructed in 2517 as a resource extraction research station for the development of more efficient planetary mining technology in cold-weather stable-gravity conditions. The station operated in this manner for 40 years before being mothballed in 2557 after being branded a "financial black hole" for NanoTrasen's regional division. Failure to sell the land occupied by the station and its extensive grounds (extending several hundred square kilometers) proved advantageous with the emergence of the Anomalous Region in 2565 as a result of Bluespace Bug activity. The region became of extreme interest to anomaly researchers overnight. In 2568 the decaying station was given a complete modern overhaul and resumed employment of several hundred employees in the name of the exploration and research of abnormal phenomena and artifacts.

The station consists of a main building with three levels. The basement level remains primarily focused around the old mining research installation, while the far more modern upper two house research laboratories, infrastructure and crew services. State-of-the-art anomaly research labs lay a small distance from the main building, connected by road or underground tunnel. The station is situated close to a large lake, which is used for power station cooling, fresh water, and waste disposal.

The basement level is home to the mining department, as well as the lower levels of the research department. Otherwise, it is primarily used for storage and much of its area consists of decomissioned rooms from the station's previous usage, some of which have remained undisturbed for years. Secure storage for valuables, technical equipment and chemicals are all found on this level, as well as the bomb testing range, housed in an abandoned section of mine. 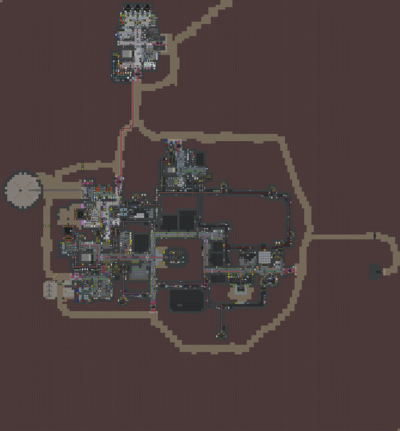 Level B, the basement level of the station.

The primary work deck of Cynosure Station, and home to the main levels of almost every department onboard. Its central feature is a large garden atrium, around which the major departments are arranged. This garden is also used as a multi-purpose event space.

Level Two is home to the upper levels of many departments, short-term crew quarters, as well as Operations and senior command offices.

While not technically a part of Cynosure Station, a dedicated comms satellite serves the station and provides local region traffic control.

A small, ever rotating number of personnel are staffed at Cynosure Station, paid directly by Nanotrasen or under external contract. Staff arrive and depart via regular shuttle services from the NCS Northern Star and Vir Interstellar Spaceport, which acts as a hub for commuters across the system, including elsewhere on the surface of Sif. All crew, as well as visitors, are normally logged in a public manifest file, to aid in organization.