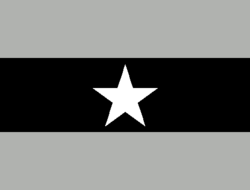 The Almach Association, or Almach, was a Mercurial governmental entity with major population centers in Shelf, Angessa's Pearl, Vounna, and Relan, and extending throughout the nearby region. It existed from February 2562 to April 2564, where it was dissolved by the Treaty of Wythe and replaced with the Skrellian Almach Protectorate.

Almach was primarily a military union designed to protect the constituent systems from an attack by SolGov, although over its life larger constituents came to use the organization to exert political pressure on their neighbors. Almach also conducted shared trade and diplomacy missions, but differed from a confederacy by its lack of legislative powers. All contributions to the Association were voluntary. Most constituent systems were organized as direct democracies, although it also contained workers' unions, republics, and even theocracies.

Almach's military forces were organized according to a decentralized strategy unique to the polity, but as time went on increasingly consolidated around the Wythe Superweapon, a star-killing weapon platform about which little is known.

The various states of Relan typically consider themselves the earliest settlement in the Almach Rim region, established by a risk-taking mining firm. This is a fairly common history among the various small colonies of the Rim, but the existence of the Almach Rim as a distinct cultural region can be traced back to the entrance of Shelf to the region in 2412. Shelf helped connect the various small mining colonies by acting as a huge trade fleet, and also brought the region much-needed intellectual capital in the form of freed positronic indentures. The presence of Shelf helped spur democratic reforms and revolutions in the region, as well as equal rights for the positronic laborers that constitute almost 40% of Almach's population.

Almach's isolation from the rest of the galactic community, including SolGov, and their close connections to their neighbors, encouraged the growth of what is considered the Almachi culture. This culture generally favors direct democracy and worker's rights, supports the right of secession (although most settlements in the region remained part of SolGov until early 2562), and most famously takes a uniquely progressive stance towards many transgressive technologies banned in SolGov. Shelf's "Closed Lips" policy on the Five Points reflects Almach's general disregard for the fundamental element of SolGov's technological policy. Extensive brain and body augmentation became commonplace among the few organic natives to Shelf by the turn of the century, and spread to nearby colonies shortly thereafter.

The Association existed as a secret agreement between the governing bodies of Shelf, Angessa's Pearl, and Aetolus since at least 2555, but only became a formal entity following the secession of the latter two in February 2562. While existing in an awkward entente with Sol for a year, eventually cultural differences lead to a protracted asymmetrical war that ended with the Association's defeat.

(Or, "How The Association Worked")

Before its dissolution, each member organization of the Association sent a single representative, together with any necessary or helpful staff members, to the Association Commons. Representatives were required by charter to have been chosen by popular referendum among all sapients in the organization, although the Association lacked the funding or domain to ensure that these referendums are truly free of all influence even early in its lifespan. Beyond the requirement for popular approval, there were no conditions on who may become a representative, permitting even drones to serve. Diplomats and generals were appointed by consensus among the Commons, and are usually considered to be hired specialists rather than government officials.

In theory, each representative's assent was considered equally important to forming a consensus. More practically, debate in the Association was often directed by the representatives of the "Big Three" states of Angessa's Pearl, Shelf, and the Free Relan Federation, and their fairly extensive staff. Agreement between these three was sufficient to constitute consensus for most major issues, with each state serving as head of a party-like power bloc within the Association.and they can be seen as something akin to political parties within the Almach Association. Constituent organizations could choose not to contribute to efforts they disagree with, but ultimately smaller Almachi states lacked the capital to make their withholding support politically relevant.

Notably, the Association did not police the actions of its constituents, only collectively organizes their economic, diplomatic, and military power.

Unlike SolGov, member organizations needed not be formal states. Any organization was free to nominate a representative and request membership into the Association, as long as they fit within its mission scope of "protecting the political autonomy of the Almach Rim and promoting morphological freedom and Mercurialism". However, the Association frequently refused to accept potentially dangerous constituent organizations, such as small secessionist outposts deep in SolGov territory. Unlike Sol, the Association made no distinction between full member states and protectorates, though there was a noticeable distinction between the Big Three and the lesser states of the region.

According to the Almachi constitution, any member organization may unilaterally withdraw from the Association at any time by ceasing to send representatives and material, but once accepted were free from any real risk of being removed. Of Almach's member states, only the Neon Light seceded in the organization's four year life, and a lack of ability to discipline radical actors within the Association is concidered to have contributed to its drastic actions at the end of the Almach Conflict.

From Each According to Their Ability

(Or, "What Constituent Organizations Did")

The Almach Association essentially ran off of donations. It lacked the power to tax and relied on voluntary contributions to function. In practice, material support was usually used as a bargaining chip to sway consensus one way or the other. This prevented the Association from being truly destitute, but it still ran on a shoestring budget for most functions other than patrols of the Almach-SolGov border, and even struggled to manage that during the latter half of the war.

The Association also accepted conditional grants and donations from anywhere in the galactic community, usually in the form of Skrellian Qerr'xeu cryptocurrency. This contributed to rumors of involvement from criminal organizations that have, so far, remained unproven (if more than likely based in truth).

Almach lacked any sort of internal policing function, and its consensus model falls apart readily in the event of a war between constituents. Some political analysts forsaw this as Almach's eventual fate, and splits within the organization are thought to have contributed to its lethargy and erratic behavior towards the end of its life.

(Or, "The Association's Military And Other Machines")

The Association Fleet was a metaphorical knife, aimed at SolGov at all times. Contributed to and commanded by constituent interests, the elements of the Fleet varied wildly in composition, construction, and doctrine. Generally, the Association adopted more unconventional tactics in their standing doctrine than SolGov, a necessity given the minuscule size of their fleet and population compared to the latter. While initially the Association Fleet was used in light anti-piracy against the Vox presence between the Rim and the outer Skrell colonies, it swiftly became focused solely around repelling Solar invasion, a task at which it proved incapable.

The "Big Three" had wildly different war doctrines, with each contributor forming a conceptual military unit.

Formalists: The doctrine espoused by the Free Relan Federation. Formalist military units tended to be organized along similar lines to SolGov and other major traditional militaries, although the Formalists remained willing to use unconventional weaponry and tactics.Though its youngest veterans were in their seventies, Relan had significantly more veterans than the rest of the Rim, which remained largely undisturbed during the Contact War. The Formalist school sought to leverage the experience of these and other veterans while they still live, focusing on arming and training the popular militia and forcing any aggressor to fight a protracted station-to-station war. Formalists generally subscribed to an "If it ain't broke, don't touch!" philosophy, while other schools found the Formalists' tactics insufficient for an asymmetrical war.

Telops: Shelf's military doctrine, focusing on the undeniable industrial advantage of nanotechnology-using nations over more traditional industrial methods. Telops sought to reduce sapient involvement in direct combat as much as possible, preferring teloperated or autonomous weapons platforms. They argued that this allows them to defray the Association's population disadvantage and build up a force of seasoned veterans without the risk of losing them to a lucky shot. Detractors criticized this strategy's reliance on bluespace communication infrastructure that makes extending supply lines beyond the territory of Almach nearly impossible and indicative of Shelf's general reluctance to commit to a defense of Almach-- criticisms that proved prescient when Shelf abandoned the Rim during the closing hours of the War.

Ascendants: The doctrine both of Angessa's Pearl and Aetolus. This strategy focused on exploiting what they refered to as the "natural superiority" of the Association's constituent species compared to the baseline human. Heavily-augmented and chemically enhanced humans, along with nearly-unkillable Promethean bioweapons, the enhanced tactical skills of a high-grade drone system, and the famous, skilled, and rumor-laden "Fortunates" of Angessa's Pearl together can out-fight almost any human ground force. Ascendants cited the successes of Unathi Breacher units during the Contact War as proof of their doctrine's puissance, while detractors both questioned its ethics and its practical benefit in any conflict where orbital superiority matters.